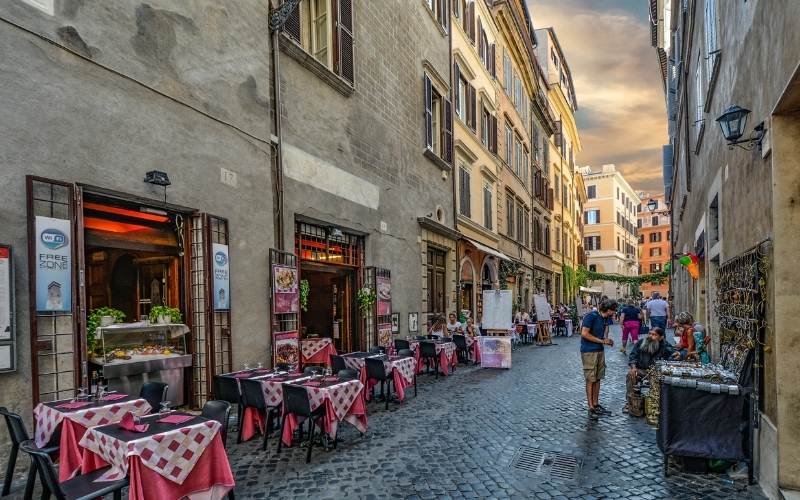 Food is so important to British people that it is estimated that around 15% of their household expenditure goes towards eating out or taking away meals. It is also estimated that for every 100 shops that open 5 will be restaurants or cafes. This statistic shows how popular eating out is and also explains why there are so many more restaurants now than there were 40 years ago when there were approximately 8,000 restaurants in the UK. According to a study, there are 44,804 Takeaways & Fast-Food Restaurants in the United Kingdom in 2022, up 2.3 percent from 2021.  The biggest factor driving this growth is a rise in the number of consumers eating out at restaurants. The research firm estimates that spending at fast-food and takeout restaurants will reach £15.8 billion by end of 2022, up from £14.3 billion in 2017 a rise of 7% per year on average.

Difference Between Restaurants, Takeaways and Cafes:

Restaurants are considered as a form of luxury. A restaurant is a place where people go out for an evening meal with more than one course, drinks and waiters, who will serve the food. It is more common among high society class and especially among celebrities.

A takeaway is a small shop where you can order food to eat on the go or in your home later. It does not have waiters or other staff in it, just a cashier or window to order your food through.

They are very cheap, which makes them popular with students and people who aren’t on a good income because they don’t have much money to spend on food. Takeaways are also very cheap for people who do not like eating in restaurants because they cost less money than restaurants, around half the price most of the time.

The word “cafe” is used to describe a variety of different types of places. In general, cafes are small establishments that typically serve a combination of hot and cold beverages along with some type of food or snack. The traditional cafe has a “counter” where you order and pay for your drink, snack, or meal and then find a seat in the restaurant to enjoy it. However, there are also cafes that have a drive-thru window or kiosk for ordering and often have no dining area at all.
There are many different types of cafes that serve different types of foods and drinks. The following are just a few examples: Coffee shop, Tea shop and Blendery.

How Many Restaurants, Takeaways and Cafes Are There in UK?

No. of Restaurants in UK:

There are approximately 40,000 restaurants in the United Kingdom. This number has been increasing rapidly in the last decade.

A 2011 survey conducted by Mintel found that 63% of adults eat out at least once a week. This has led to a boom in restaurants. Restaurants are also very popular because they are seen as an affordable way to enjoy good quality food without having to spend too much money.

According to data provided by the National Restaurant Association, the numbers of restaurants and foodservice outlets have steadily increased over the past five years.

No. of Takeaways in UK:

In recent years, the number of takeaway outlets in UK has been increasing significantly.

According to Statist,
“As of 2019, there were over 40 thousand takeaway food stores and mobile food stands in the United Kingdom. The number of outlets grew in over the five years from 2015 to 2019.“

There are a number of reasons for this trend. Some people find it convenient to order food from a takeaway rather than cook at home. They don’t want to spend time cooking or washing up after a meal.

We can estimate that there are between 80,000 and 100,000 cafes in the UK. This estimation is based on using data about businesses registered with HMRC and premises licensed for alcohol by local authorities.

There are 2,542,698 businesses registered with HMRC in England and Wales that have an ‘A’ or ‘B’ type code associated with cafes. These range from small independent coffee shops to large national chains such as Starbucks and Costa Coffee.

Areas with Highest Concentration of Restaurants, Takeaways and Cafes Found in the UK

The UK has a wide variety of restaurants, takeaways, and cafes. The number of these establishments is growing constantly. People are more inclined to eat out, in contrast to cooking at home. It is estimated that 70% of the population eats at least one takeaway meal per week.

A survey was conducted to find out the most popular places for eating out among the population of UK.

There are also some other trends observed by this survey:

London is home to a quarter of all restaurants and takeaways in the UK, which can make finding a good place to eat a bit of a challenge. The good news is that there are plenty of them. In fact, London boasts one restaurant for every 350 people, which means that you can find your next favorite place to dine at almost any time of day or night. You could even try one new restaurant or takeaway each week for the next 50 years, and you would still only have scratched the surface.

The sheer number of choices might lead you to think that it’s difficult to find somewhere great to eat. But don’t worry there are plenty of ways to make sure you don’t waste your time trying out places that aren’t worth it!

Reasons of Sharp Increase in the Number of Restaurants, Takeaways and Cafes in Last Few Years

As we all know, the style of dining and food habits have changed a lot in the last years. Eating out has become more and more popular since people are always busy with their daily lives and they do not have much time left to cook or prepare healthy meals. Eating in restaurants or ordering takeaways became so popular that there are now even specialized websites where people can order food online. With this high demand, many new restaurants and takeaways opened in different parts of the city.

Some Important Facts and Figures About Food Industry in UK

The British Restaurant, Pub & Hot Food Takeaway Association estimates there are currently around millions of restaurants and takeaway restaurants in the UK, which is the highest amount ever recorded. This figure is compiled from the total number of businesses registered with the association, and is made up of 71% restaurants and 29% takeaways. This is a 10% increase in restaurant numbers since 2009.

The demand for fast food has increased significantly over recent years and has led to many UK chains opening new outlets all over the country. In addition to this, more independent takeaways are starting their own business by buying a franchise or joining forces with other outlets to expand their customer base even further. This has led to an increase in delivery services which cater for people who cannot get out due to illness or disability.